Below is an essay I published in a print zine about the cult classic film The Room. If you have not seen it, you owe it to yourself to give it a try. And after you watch it, come back and read this essay. I think you will enjoy it. 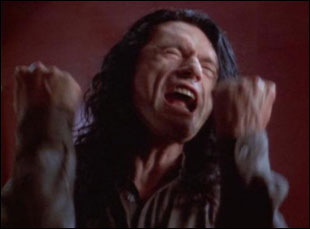 Deeper Into The Room

There is much to ponder about Tommy Wiseau’s film. But nestled amongst the few answerable and far more unanswerable questions is one that garners much discussion. What does the title mean? Many posit that it is simply a descriptive phrase. The film mostly takes place in a single room. But Wiseau is no slouch when it comes to symbolism, and care must be taken to approach an analysis of the title with more than just a passing glance. Like all things in The Room, the title is not just black and white.

When approached in an interview in 2010, Wiseau is vague about what it means. “[sic] The room is a special place. Is only you have the key for it. Same my. This is my place. This is your place. You as well. And I bet you have one other place which you actually call the room. Or their place. But I let’s call it the room, right? You the. Private place. You do whatever you wanted. That’s why we call it the room. We don’t call it our room. Okay? Yeah, all right.”

This evasiveness is typical of the auteur. He wants us to work at understanding his film and through that process develop a deeper understanding of ourselves. To begin we must examine the title literally.

In the film there are two main rooms: the downstairs living room, in which many pivotal scenes take place (the mother-in-law’s heartrending revelation that she has breast cancer, for example), and the upstairs bedroom in which the main character bares both his body and his soul. Both of these rooms are important locations in the story, but there is not enough evidence to support either of them being the subject of the title.

But what of Wiseau’s quote above? A tacit reading of the title is too shallow to fit his description. Wiseau could be implying that the room is not a physical structure, but one that we build around ourselves. Our “special place.” This has many implications. Johnny (played by Wiseau himself) has let some characters into his “room.” By letting his guard down, or “opening the door,” he has made himself vulnerable. And the one he has trusted most, Lisa, violated that trust, or to continue the metaphor: “vandalized Johnny’s room.” Hence the classic J’Accuse screamed by Johnny during his most pained moment, “You’re tearing me apart, Lisa!”

This take on the title is reinforced with subtle symbolism that shows how the characters are confined and stuck in rooms of their own creation. The set design steeps the production in claustrophobia. From the sparsely furnished apartment to the four-poster bed ensconced with walls of fabric. Even the open-aired rooftop is obviously green-screened. It’s a brilliant choice to confine the characters even more.

When the characters do escape those confines, Wiseau shifts his symbolism from production design to the actions of the characters. He shows that even outside they remain contained, and are only able to throw a football very short distances. It is as if the walls are still there, preventing them from getting more than a few feet apart. When a character finally does try to escape, by running to catch a long football pass, he trips and falls. It’s as if Wiseau is punishing him for trying to leave the room without a key.

At the end of the film Johnny does find a key to his special place, thereby finding a way to escape. It’s a bleak, depressing world view, but it’s presented in such a way that the audience is more angry than sad. We are angry at Lisa. We are angry at Mark. Why? Because we saw how Johnny let them into his room. We saw how they took advantage of that trust and we understand how Johnny had no other way out.

The title, in the end, is obvious. The Room is indeed Johnny’s special place. One that was full of kindness and love, but was violated by those he trusted most. Ultimately, Tommy Wiseau makes us ask the question: Who would you let into your room? Each viewer will have their own answer. For Johnny, the answer is simple: Denny. Only Denny.